Jacob has been asking forever to see where I work. So Maiya stayed home with my husband so she could have Daddy all to herself while me and my little man hopped in the pickup and drove the commute to my firehall. Except Jacob didn't make it. Well, technically he did... but he fell asleep before we got there and as much as I tried to wake him up, I couldn't. So I carried him in and plopped him down in a chair. 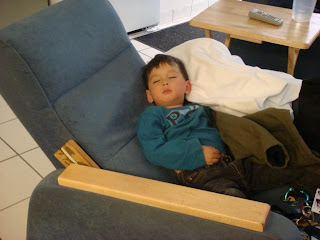 The guys were in the middle of lunch so I dug in of course. It was so nice to have a meal cooked for me, eat in peace and not have to do the dishes.

The guys took turns calling his name. He didn't budge. We cranked up the tv.

And on he slept. 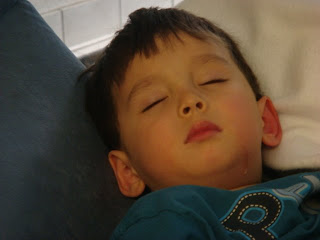 After almost a two hour nap he was up. He was a little disoriented trying to figure out where he was since he had never visited my station before. We were checking out the trucks (his favourite being the ladder truck) when the pumper got a call. It was a bit ironic because I had just finished explaining to him that the truck might need to go out and that it would be loud and not to be scared. Jacob watched the guys jump on the truck and race out lights and sirens. It was loud and he was a bit frightened. I told him to push this button on the wall and it triggered the bay door to close. I put him in the driver's seat of the ladder truck and he was scared to the point of shaking... very common in young children since they are used to playing with their toy firetrucks that when they actually see how big it is up close they get a bit nervous. These trucks are big but when you are 2 and a half they are gigantic. Look at him beside the rear tires. 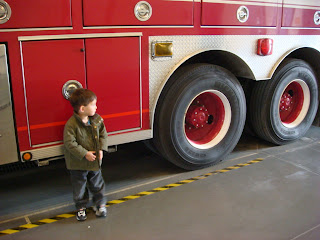 And at the pump panel. 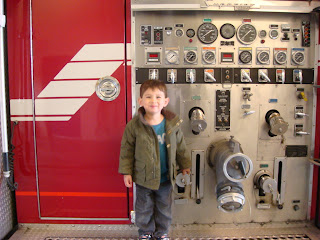 I think he was still figuring out why the pumper raced out with such urgency. He watches the firetrucks near our home race by from our window but he's never seen how the truck actually leaves the station for an emergency.

He finally warmed up and asked to sit in the rear jump seats. Then I couldn't get him off. So like the good mother I am I had to bribe him with a chocolate ice cream cone that I took out of the firehall freezer secret stash. A firefighter won't get his share of dessert tonight but hey, it's all for a good cause.

It's way past his bedtime and Jacob just fell asleep. Maybe it was because of the great nap or that he was overdosed on adventure or sugar today, I don't know. But it was a great day for a little boy I must say.
Posted by firemama at 9:20 PM