Although Maiya just turned 7 months old, I think she would make a great firefighter one day... because SHE CAN EAT. The boys at work are known for great appetites and squawk when a meal is late hence the fact that Maiya would fit right in. Any food I give her she hoovers it down. I don't like to feed her baby food from a jar because I think it's gross (have you ever tasted it?!) and I have a rule about not feeding anything to my children that I wouldn't eat myself. The exception being is cod liver oil. I hate it but Jacob loves it. But back to Maiya... I usually feed her whatever I happen to be eating except I'll smush it or stick it in a blender. And she'll sit there with her mouth wide open like a baby bird waiting for me to feed her. And she'll savour it with her little lips pursed and then open her mouth again waiting for more. She's tried feeding herself but gets frustrated because she can't shovel it into her mouth fast enough and it ends up everywhere but where she wants it to go. She has yet to refuse anything I've given her... avocado, sweet potato, steamed spinach, steamed carrots, lake trout, salmon, chicken, green beans, prunes, fruit, squash...... CrossFitters, you'd be proud... she's pretty much a Paleo baby... well... except for milk but it's breastmilk so that doesn't count really. And when she's done her meals (as in plural because of the second or third helpings) she lets out a huge burp of satisfaction and gives a grin of thanks. 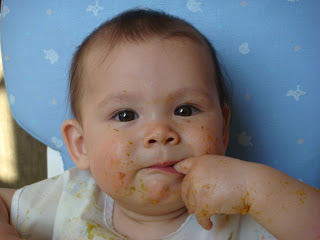 You're welcome Maiya.
Posted by firemama at 9:42 PM