Jacob was chewed to bits by a hungry mosquito. He was bitten on the elbow, the side of his chin, and his eyelid. Poor little guy looks like Quasimodo now. His eye is swollen shut and the side of his chin has blown up. And his elbow is just plain itchy. I don't like giving my children any over the counter meds so I put him in the bath with baking soda and it has calmed the 'itchies'. Before bed I'll make him a chamomile compress to go over his eye.

He just looked so sad. 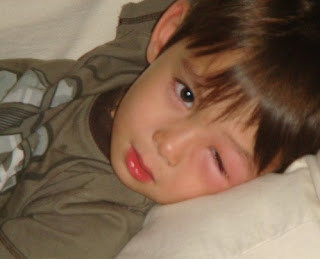 .... so my husband was lovely and set Jacob up on the couch so he could watch his Cars dvd on the computer since we still don't have a television. Took his mind off the bites and he cheered up even though he is doing everything he can to not scratch his eyelid. 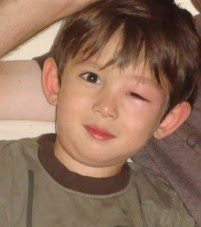 And what was nice is that he wanted to snuggle with me which is so rare these days for my growing boy and so I am trying to hold on to these moments. I was supposed to go out tonight for a trainer's send-off with my CrossFit friends after I put the kids to bed. I was looking forward to a bit of social activity since it's been ages since I've been out but really, when I think of it, being at home with snuggly children is priceless.
Posted by firemama at 5:32 PM

Email ThisBlogThis!Share to TwitterShare to FacebookShare to Pinterest
Labels: Jacob