Now that the the Christmas hoopla has died down, we can focus on the real religion of Canada: hockey! Jacob has expressed an interest in the sport since he was two and my husband and I have been dragging our heels.... only because we don't follow or understand the rules of the game (yes, very un-Canadian I know but heck, he's a Brit and I'm Chinese so that's our excuse). But, we decided to get with the times and dig up our old rusty skates.... and get Jacob some gear of his own. 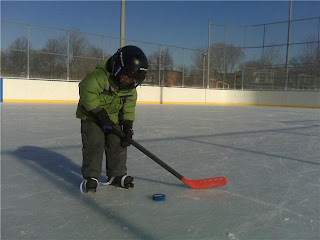 The best thing about it is how tired he gets... anything that leaves him begging for a nap is great. :) 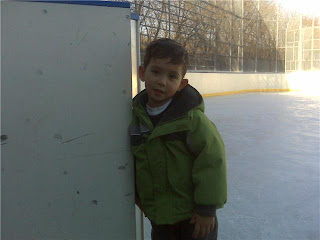 I guess I'll have to pay more attention when the game is on at the fire house and figure out the blue lines and what offside means. I'm sure I'll figure it out eventually and become a sideline pro.

Oh my god I hope I don't become one of those hockey moms. That will really be the end of me.
Posted by firemama at 8:24 AM