Forget the swine flu. My single girlfriends have the blue flu. They are always asking me if I can hook them up with a firefighter. They have this thing for firemen. They find them hot (no pun intended). And sexy. Maybe because I'm married, or maybe because I've been working with the guys for so long but I'm so not attracted to them that way. They are like brothers, father figures, and uncles to me. We live at the station like an extended family and perhaps as such I can't ever see them as sexy because I know way too much about them. They do stuff at work that they would never ever do on a date... at least I hope not. Case in point: There's one guy (now retired) who would floss his teeth at the table. Another guy would clip his freaking toenails. There's always the farter and the belcher... and the guy who wears way too much cologne or the other guy who doesn't wear enough. There are the knuckle draggers and the chick-chasers, the partiers and the poets. The thing is, they are just guys. But I can see the appeal... they are blue collar handymen who run into burning buildings and are in the business of saving lives. And it's hard not to look dashing in bunker gear. And a soot smudge across the cheek doesn't hurt either. So here you go gals... for your viewing pleasure... may I present to you Fireman Specimen A and B:
.
.
.
.
.
.
.
.
.
.
.
.
.
. 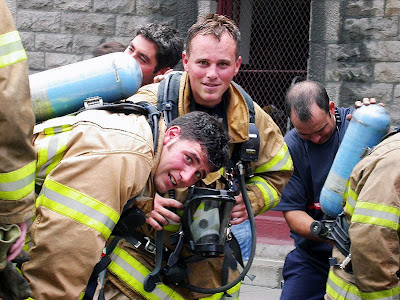 I do have to admit, these guys are cute and they probably don't pick their nose. But sorry gals, I have no idea where to find them as they don't work on my department but they are Canadian so that should narrow down the search a bit. ;)
Posted by firemama at 10:28 PM