I survived Christmas mostly unscathed... sure I had a battle scar of two along the way but it's over! Only 364 days till the blasted holiday comes back.

Thankfully yesterday's dinner went much better. It helped that I phoned them and spoke quite sternly after we got home from the 'cookie' dinner as Jacob was in the throes of a sugar tantrum. They might think I am harsh but the health of my son is more important than being polite. I guess they finally got it..and there was nary a sugar treat to be seen at the house and Jacob was as good as gold as a result. I did have to pry away a glass of Kool-Aid that was given to him but I suppose Rome can't be built in a day. He played quietly with his toys and that was that. I was quite surprised how unfazed he was by the mountain of toys he received from the inlaws. He just wanted to play with his toy truck and tool set and his grampa. Goes to show you that my theory that a couple of appropriate toys and some good company is all you need. 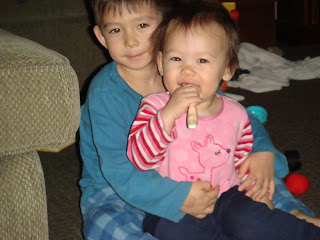 Their little monkey antics and million watt smiles are all I will ever need in this world.
Posted by firemama at 11:19 AM