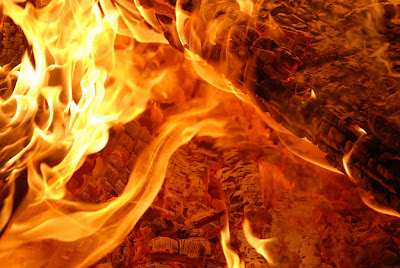 Fire is physical, spiritual, and metaphysical all rolled into one giant ball of burning energy. There is nothing like standing in the middle of an inferno watching the flames roll over my head. It's hot, but not unbearable. And I thank my lucky stars that the bunker gear, which is just as thick as a winter coat, is doing its job keeping me from being vaporized. It still blows my mind that I can basically stand in a furnace and feel fine. And sometimes during the middle of a fire I will stand stock-still for a split second and stare at the flames in amazement because more often than not in the next split second everything will get smoky with zero visibility and I'll have to drop to my hands and knees and feel my way around while never letting go of the hoseline. I was taught to never, ever let go of the hose...although heavy and awkward to manoevre, it's the only protection you have against the flame.... and it's my lifeline leading me back outside to safety. When the fire is finally extinguished, as strange as it sounds, it's a bit of a letdown when it's over. I am not sure if it's the fatigue from the physical exertion, or the slump after the adrenaline surge. All I know is that once one fire is out, every firefighter is waiting eagerly for the next one to start. I guess we're just weird that way.
Posted by firemama at 10:06 PM