Here's a picture of yours truly that one of the firefighters took after a call at work: 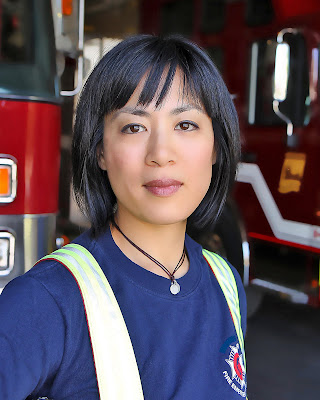 It's one of the very few pictures I like of myself, probably because this photo captures me where I am in my element and most comfortable in my skin and my surroundings. I wish I could bring that comfort level into my own home. Unfortunately, I have yet to figure out motherhood and I'm just making things up as I go along, flying by the seat of my pants, and learning from my children, and from my own mistakes. If you were to take a snapshot of me at home I would be a disheveled sweaty mess, sometimes feeling like a failure, feeling the pressure to get all the things I need to get done but not accomplishing half the tasks I've set out for myself. And often feeling completely worn down. (I don't get a lot of 'atta boys' at home although Jacob did offer me one of his stickers from his star chart when he noticed I had tidied the house.) But at work, for some reason I feel polished, assured, wise and in control. I feel like I have fire instead of blood running through my veins. I have no idea why. Maybe it's because work is my refuge and my haven and it's better than a five star hotel. Maybe it's because the sleepovers are even better than the sleepovers I had as a kid. Maybe it's the uniform. Maybe it's the bunker gear that gives me super human powers. Who knows? Just super glad that I'm headed back on shift in the morning because after a few days off I sure do miss the smell of diesel and smoke. That's the beauty of my job, I am at home long enough to crave being back at work. And I am at work long enough to crave seeing my little family at the end of a shift.

Off to bed. I'm on the ladder truck but gonna try to slide over to the pumper since it's a busier truck and runs more calls. Let's see what tomorrow brings. xo
Posted by firemama at 8:04 PM