Well, I got my wish. Yesterday's shift was unbelievably busy. But not in the way I expected. Soon as we walked on the floor my crew was summoned to the training tower where we spent the next 8 hours doing training evolutions. In full gear and breathing apparatus we had to crawl through a blacked out confined space maze where some of the openings were so tight you had to take your pack off and push it in front of you while being careful not to rip your facepiece off, do a self-rescue head first out of a window (check out the video that inspired our training), reviewed policies, covered a hazmat spill using AFF foam (so fun! looked like a giant bubble bath by the time we were done), did a housefire evolution with live burn, and did a high rise fire evolution. By the end of the day I was pretty pooched. I realized that I had some advantages and disadvantages: I rocked the confine space evolution because I am slim enough to squeeze through the tightest of spaces but some of the equipment was fighting against my body... the airpack harness wouldn't cinch up around my waist tight enough so the weight of the pack started to really bug my neck and shoulders after a few hours. And I was stuck humping 60 feet of charged hose line through a smoky house with zero visibility. It came down to feeling my way back to where the hose was deployed... bend over to pick it up, sling it over my shoulder, turn around and head back towards the fire and drag it as far as I could, turn around and do the whole thing back again a half a dozen times... all by my lonesome. What made it harder was that there were two tight corners that I had to manoeuvre around and bending charged fire lines is pretty darn near impossible. I was breathing so hard I couldn't hear radio communications so for every two breaths I took I held my breath for a few seconds just to create some quiet and listen instead of panting and sounding like Darth Vader in my mask. In a real fire situation I would have had help but since this was training with worst case scenarioI was stuck on my own. Good fun anyway. I learned a few other things like it is great fun to slide down a ladder but probably wouldn't be that fun with flames trying to get at my behind, and I also learned that no matter how tasty and delicious, do not eat a plate of greasy french fries on your lunch break right before you are going to be humping hose.... burping in your facepiece is no fun whatsoever.

On a completely different note, my husband finally figured out a way to tame our daughter at the dinner table. Lately she has taken to tap dancing on the table and messing around and doing everything but eat at dinner time. So I had to laugh out loud when he sent me this picture last night: 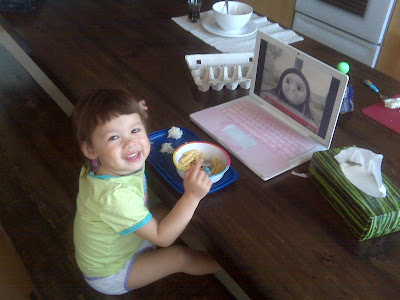 In desperation he grabbed my laptop and stuck in a DVD. Thomas the Tank Engine saves the day!
Posted by firemama at 9:10 AM